A pleasant way to spend an evening

Work has been particularly stressful of late but, last night, I managed to get away early to fish the Little River Avon.  I’ve not fished there this season, though I’ve done some work parties and helped Neil when he was guiding Justin so I wasn’t particularly shocked at how low & slow the water is.

The barley is now in so the surrounding fields wear their stubble fashionably long like a moody monochrome model in an aftershave ad – I remember fields like this when I was a kid; making bale houses, actually bale castles which we defended against the other kids by pulling up clumps of stubble, setting fire to them and lobbing it over the ramparts!  Hooligans! Well, we had to make our own entertainment in those days 🙂

The whole area has a peaceful aire now that nature’s frantic urges of Spring and early Summer are over.  There is a sense of ease, of a pausing before the work of stocking up for the Winter begins in a few week’s time.  Fortunately this feeling is pervasive, enough for me to forget about clients and project managers, deadlines and databases.  If music can soothe the savage breast then a mid-summer’s evening can certainly calm a stressed-out techie.

Researching my family history has been no mean feat, especially in view of the fact that my starting point, my great-grandfather, was a chap called Fred Smith who lived somewhere in Wiltshire – that was all I had to go on.  Anyway, it’s surprising what you can discover and I have managed to trace the line back to the early 1700s.

One thing that strikes me is that nearly all of the men in my family have been listed by the census as ‘Ag Lab’ – agricultural Labourer.  Peasant.

Every one of them, to a man, would be ashamed of me today.

Yesterday I spent the day pulling Himalayan Balsam as part of the MRA‘s Going Native project, aimed at eradicating invasive, non-native species from the Monnow catchment.  Just six hours of manual labour has me searching for a place on my body that doesn’t ache.  How on earth did the labourers of old do this every day?

To off-set the aches and pains I have the knowledge that the MRA has made huge strides towards the project’s aims, and going back to areas that 12 months ago were completely infested with HB I can see a huge improvement.  The weed is mostly confined to isolated pockets which is easily pulled by teams of volunteers in a few short hours. That doesn’t mean that the job is anywhere near done – the whole-catchment, top to bottom approach means we will be going back over the ground that we have already sprayed/pulled for several years to come, and there is still a lot of un-touched ground in front of us but, there is hope – I have seen it.  Monmouth beckons and we will be there sooner than anyone could have anticipated.

On behalf of the MRA I’d like to thank all of the volunteers who attended this weekend.  I know some of you travelled from far afield to offer your assistance – your efforts are both vital and hugely appreciated.

Leave a comment | posted in Habitat, Musings, The Monnow

And the winner is!

As the winner of the ‘Day on the Little River Avon’ lot in the Monnow Rivers Association auction he got to spend a day in the dubious company of Neil and I.

Many fish caught.  Much Balsam pulled; and I was reminded of what a lovely little river this is.

Neil has some great ideas.  On Thursday I had a message saying he was taking the van down to the Monnow to camp for the weekend.  He’s taking Ollie & Shane [splendid fellows both], and that I was welcome to join them if I wish.  I had no hesitation in accepting.

It’s 10:30, Friday morning.  My van is packed.  I’m sitting in my conservatory trying to hear the TV [Paul Young – Hooked on Fishing, Golden Piranha in Argentina] over the noise of the rain bouncing off the roof.  The gutters are over-flowing, the bottom of the garden is starting to flood and there has just been an almighty clap of thunder.

If the weather on the Brecon Beacons is anything like it is here we’ll be more likely to catch Piranha than trout this weekend.

The previous evening had been spent with Neil, planning our June trip to Scotland.  We both bemoaned our lack of success in the latter stages of winter as the once plentiful Grayling had evaporated; leaving a desert where earlier I had seen shoals of 60 plus on the fin by the tunnels.

“I’m fed up of chucking bugs”.  We both were.   We were both hungry for an opportunity to cast a dry.

END_OF_DOCUMENT_TOKEN_TO_BE_REPLACED

I’ve neglected these pages for too long so, to get back into the swing; here’s an update of what’s been happening in my fishing world.

Firstly, the new rod [see picture below] works just fine!  I was invited to fish a short, very private section of the River Churn at the fag-end of the Mayfly season.  I took 2 fish in the first three casts so I know that we are going to get on.  Once again, thanks Bob, she’s a beaut!

Like most anglers I’ve been staring in despair at the weather forecasts wondering when things would change for the better.  Sure, I’ve managed the odd snatched hour when the rain’s held off long enough to make a trip out feasible but, even then, the cold gusty easterly has made things difficult and not exactly pleasurable.  I did have a more pleasant experience yesterday morning when I fished the Kennels beat of the Charfield section of the Little River Avon.  On Friday evening the water was starting to fine down but there was only about 6″ of visibility but, by Sunday it was greatly improved and just about perfect.  In the short time I had I managed to winkle out a brace of 10″ brownies still sporting feint parr marks – a very encouraging clue as to the health of the river.

I hear that the Monnow is still completely washed out so, until things improve I guess I’ll be staying to the east of the Severn.

Whilst I may have neglected this blog I have not been entirely idle in the world of on-line fishing.  I have been asked to give a much needed makeover to the Charfield AA’s web site.  Though it’s still in it’s infancy you can get a sneak preview here – any comments, criticisms or suggestions would be most welcome.

I’m not very good at this

I had an after-work visit to my therapist yesterday. She soothes my furrowed brow and washes away the cares of a complicated life but sometimes I come away thinking ‘what was she trying to tell me?’ Not this time though; I left with the clear and resounding message ‘you’re not very good at this; are you?’

I parked by the bridge on the A38 and, as I always do, peeped over the parapet to see what’s happening below. Immediately I saw two large dark shapes streaking off down-stream – Bugger! We’ve had a little rain over the past few days so I was expecting at least a tinge of colour, but the water was low and gin clear. I scanned the river bed and my eyes came to rest where the side stream joins the main river by the northern tunnel – a shoal of Grayling. 30, possibly 40 small ladies of about 8 to 10 inches moving as one body but constantly changing their position in the shoal. Wonderful.

Sometimes these after-work excursions have an element of pressure about them as I’m stealing time between work and home commitments but this time I had nowhere to be, no-one to see, so I could afford to take my time. Nothing hatching and no sign of fish moving so I went exploring the deeper channels with a pair of nymphs. All of the usual places proved fruitless but somehow I didn’t get frustrated and I moved up to the shallower section just below the tunnels where I made the decision not to fish blindly but to practice my fish spotting skills in the sandy, gravelly channels between the waving weeds.

I spent the best part of an hour searching for a sign; a flash, a shadow, an unusual movement – nothing. So I returned to the bridge to see if the Grayling were still in residence. Of course, they weren’t. I can only assume they had a prior engagement – either that or the local kids had been throwing stones at them again.

So what did I learn from my unsuccessful foray? I need more practice.

Taken on the opening evening of the Monnow Social 2007 – Anyone want to hazard a guess at what this sagacious looking lot are saying? 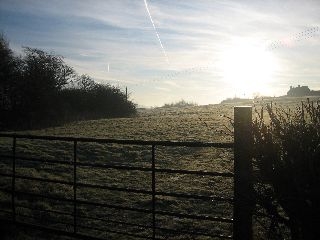 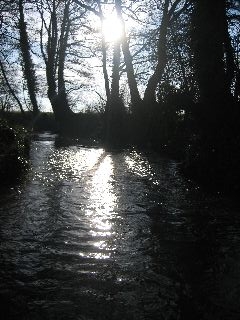 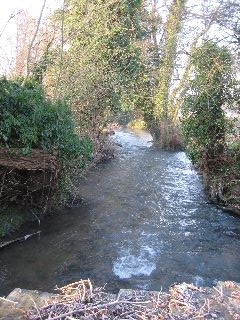 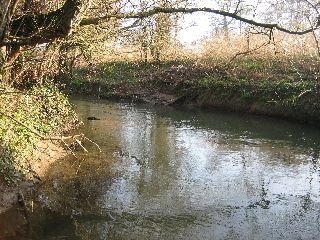 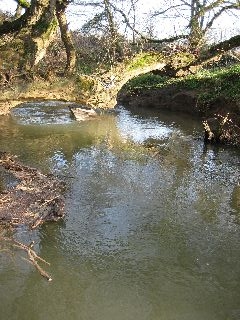 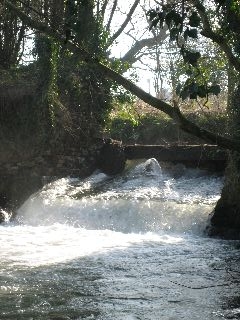 Yesterday, as always, dawn broke to the accompaniment of our resident Robin broadcasting his presence to all and sundry. Already he has a wife and they have started house-hunting in the best looking spots in the garden – I fear they will do as they did last year and favour the neighbours Buddleia as the site for their nest while being content to gobble up every meal-worm I provide for their breakfast. Ungrateful little buggers.

This morning he was not alone in offering up his song to raise the spirits in the pre-dawn darkness; he had some stiff competition from something unseen at the bottom of the garden. I recognised the song but I couldn’t quite put a name to the singer who seemed out of place somehow on this chilly February morning – this was definitely a song of the summer. As the light improved I was surprised to see a pair of Blackcaps stabbing away at the crab-apples that stubbornly cling to the bare branches right through the winter. I wouldn’t normally expect to see them until late April.

In the afternoon, under a sparkling blue sky I watched a dull performance from Gloucester as they managed to kick away almost every chance that a tight fisted Tigers team offered them. I felt somewhat overdressed in an overcoat and scarf while many of my fellow spectators were in shirt-sleeves – brave indeed for early February.

Today I’m going to take the cane rod [now back from a short vacation in Michigan] over to Ozleworth Brook to test it’s capabilities in the tight, overgrown confines of this challenging little stretch. I don’t expect to see any prolific hatches of BWOs despite the warmth of the late winter sunshine; although, you never know, they may have got the same message as the birds and put in an early appearance – and winter might really be coming to an early end.

Leave a comment | posted in Little Avon, Musings, Tales from the river bank